I’ve been blessed with the opportunity to acquire a few photographs from the estate of the venerated Lou Varro, the best known WWII pinup calendar artist in the MTO during WWII.  Lou is well known for his small-print monthly pinup calendars that would be posted in B-24 and B-17 bombers during missions in Italy.  I’ve seen a handful of his calendars during my time collecting WWII photography and am happy to have acquired a few photos of the artist.  I also snagged an original Varro December 1944 “topless” calendar page.

Lou’s most popular subject was attractive women from his hometown.  Although the subject of the portrait is currently unknown, we do know that this photo made the news in Lou’s hometown of Regina in Saskatchewan, Canada in 1944.  I would love to track down the article, it apparently featured Lou and his exploits during his service with a B-24 bomb group during WWII.  See below for the photo that “made the article.”

The woman featured in the above sketch can clearly be seen in a shot of Lou’s bunk taken shortly thereafter.  His calendar obsession can be seen in the image……. what a great glimpse into the everyday life of a bomb group EM.

Lou passed away a few years ago, but had a lot to say about his wartime art career:

“Soon after, he joined the U.S. Army Air Corps and served in World War II as a non-commissioned officer. While stationed in southern Italy, he worked as a processor for films that came off bomber planes after they were sent for an attack. Here, he found another opportunity to work as an artist.”

“I dabbled in photography, but my specialty then was calendars,” Varro said.

(from the above linked article) Varro would use his spare time in the photography lab — an old barn that had been converted for military use — to make calendars for his fellow servicemen.

“I would find a picture of a pretty girl, make a couple of them and give them away for the guys to put in their planes or their huts,” he said. “A lot of guys knew and liked me for that.”

This is a continual post and will be updated as more material and information is added to the PortraitsofWar collection.

One of Varro’s famous WWII pinup calendars.  Most of his models were taken from previously exiting “nudie magazines” and retrofitted into calendars.  Please enjoy Miss December, 1944! 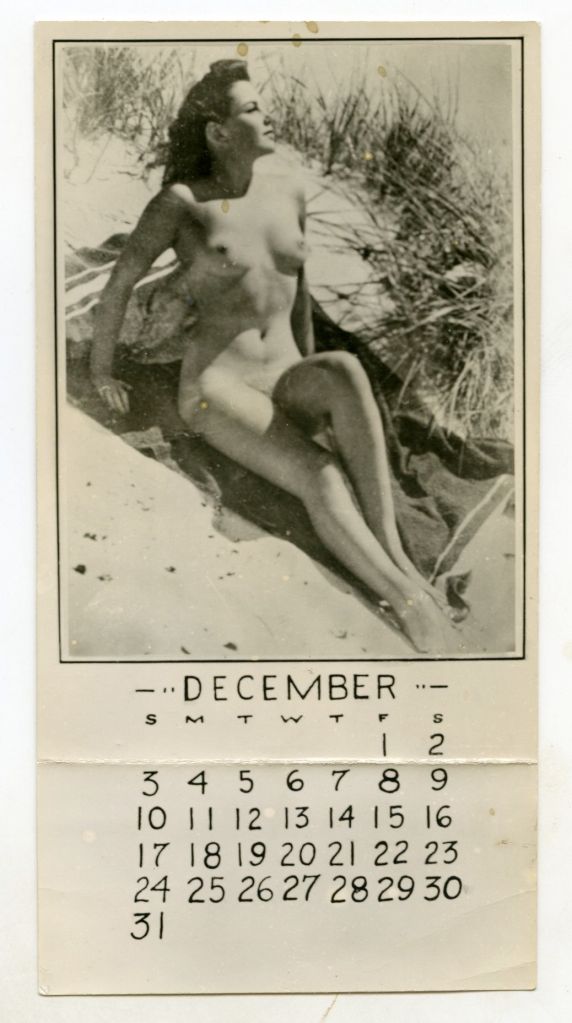