Glenn Miller poses with some members of the 388th Bomb Group.  Only a few months later Miller went missing during a flight over the English Channel, launching a 70 year search for his wreckage.  His death is still an unknown, although many suggest that he was in fact a German spy or was possibly shot down by friendly fire. Check here for some possible leads: 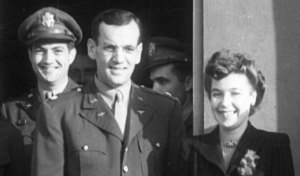 Alva Snaps a Photo of the Glenn Miller Band Crowd 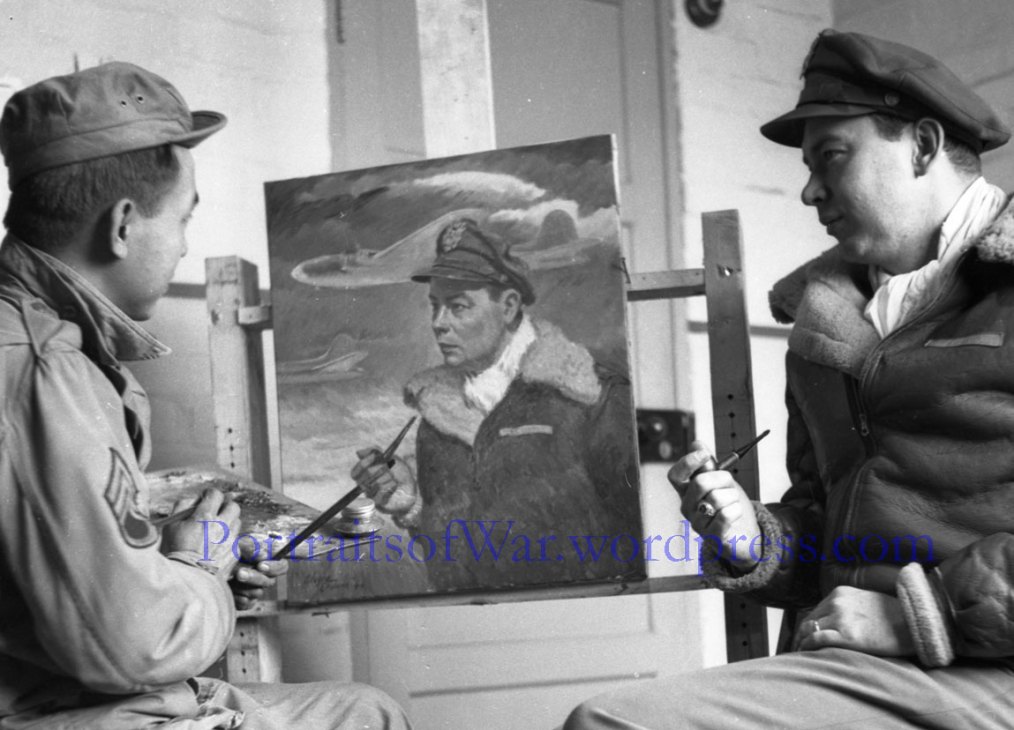 My quest to discover the mysterious background of a WWII artist started nearly two years ago with the acquisition of a grouping of photographs and negatives from a seemingly nameless soldier.  I soon was able to deduce his name – Alva Alegre, and began the incredibly interesting voyage of tracking down his true identity.  His photography is hauntingly personal, unveiling the often unseen side of war; the everyday life of the 388th Bomb Group.  The journey has introduced me to dozens of people with connections of “Al”, from 94 year old bomber pilots who fondly remember seeing his artwork behind the Officers Bar in England, to military engineers who knew him later in life.  I’ve spent hundreds of hours (really!) scanning his photographs and dozens more hours researching his life.

After contacting the U.S. Army Arsenal where Al worked in the 1960s, I was able to find a museum curator who has access to works created by Al in the late 1960s.  He also was able to track down an article written for the employee newspaper that highlights his life story.  Finally!  Please read and check out some of my related posts.  Just search for 388th in the search menu.  His photographic skills cannot be understated.

If your business should take you to the Benet R&E Labs, make it your business to visit the Reception Area and view the Ilustations of Watervliet – designed weapons of action.  You’ll find they combine meticulous craftsmanship with artistic perception to the degree that makes these paintings far more than straightforward representations, and that the Arsenal is fortunate indeed to have the talent that produced them at its service.

That talent belongs to Al Alegre who has been our technical illustrator since 1963 when he arrived at Watervliet following a varied and colorful career that began when he left his native Phillipines at age of 17.  He came first, via Canada, to Chicago where he abandoned his original intention to enter the electrical engineering field, deciding instead on a career in art.  So, then it was off to Northwestern University where he acquired a bachelor of philosophy, majoring in art, then thence to the Artt Institute of Chicago.

After a year back home in the Phillipines he wended his way to California in 1939 and for the next two years worked as a portrait sketch artist in the Phillipiines Pavillion at the San Francisco Worlds Fair.  Here he produced more than 4,000 charcoal portrait sketches and between seasons attended the Art Center School in Los Angeles – where he also studied photography.

With the closing of the Fair, “the fastest brush in the West” entered the U.S. Army Air Force and assigned as an armament staff sergeant with the 8th Air Force {388th Bomb Group} in England.  During off-duty hours he continued to perfect his skills, burning out portraits of his fellow soldiers – including no less a GI than General Ira Eaker, boss of the 8th.

After the war Al returned to the Windy City for graduate studies at the University of Chicago and then moved on to New York City where he received his masters degree in art from Columia University in 1947.

Following his completion of a course in color photography Al opened his own art and photography establishment “Studio 74” at that number on 57th Street, which happened to be located next door to the voice instruction school of famed composer Gian Carlo-Menotti which, Al says, provided not only a pleasant musical accompaniment but also a wealth of models for the Alegre activity.

Exposure to commercial art led to an interest in air brush techniques and consequently to Alegre’s present career as a technical illustration.  Since embarking in the field he has worked for Polaroid Electronics in Long Island, Fairchild Aircraft in Maryland, EDO COpr, Long Island, and the Missile and Space Division of GE in Philadelphia.

It was while working for GE(on space re-entry vehicles) that Al was contacted by representatives  of our Personnel Office and soon afterward joined us for a relationship that has proved mutually profitable ever since.

Al’s artistic outpost, has not been restricted to his arsenal assignments.  His work in many media employing many techniques is well known to many Arsenalites.  A former charter member of the Artist’s Equity of New YOrk, and professor of a listing in “Who’s Who in American Arts” he’s now a member of the Arsenal Art Guild exhibits.  Another regular extra-curricular activity is the painting of portraits of Aresenal C.O.s which he presents to them upon their leaving Watervliet.

Apresently Al maintains a studio apartment in Troy and also a studio in PHiladelphia where, along with producing a variety of paintings, he is also working on a book on technical illstration.

His ambition for the future is to instruct.  And, by the results achieved by his students in the Art Guild class he recently conducted, future students are in store for a very rewarding experience.


Caught in the act of painting! 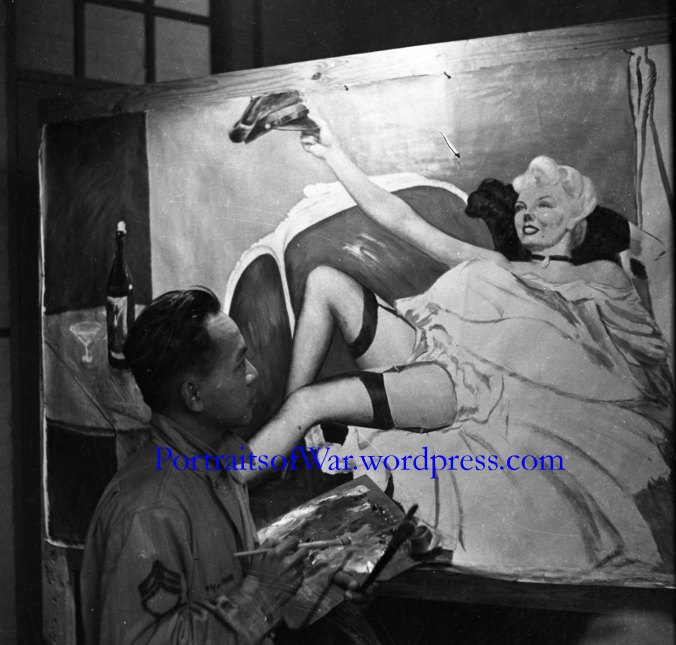 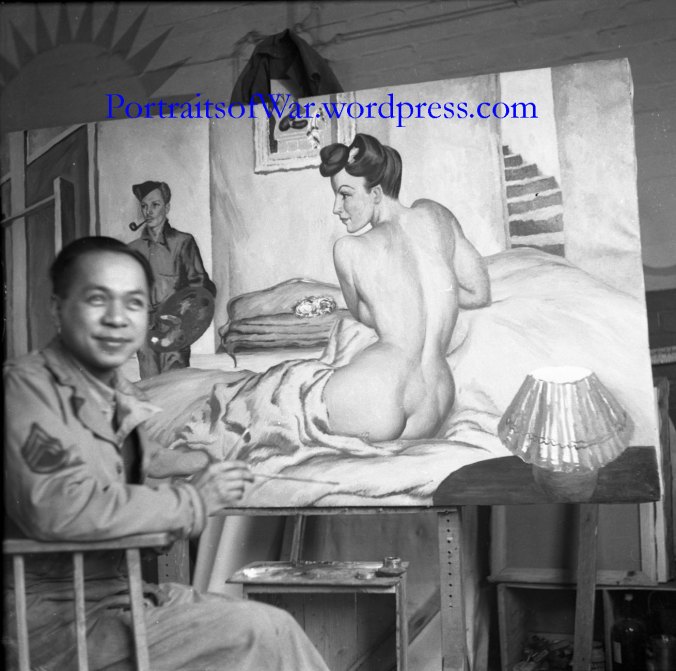 We here at Portraits of War have spent countless hours scanning and editing the photographic work of Alva, but have neglected to post a series of photos relating to what he looked like while stationed at Kennishall nearly 70 years ago.  I hope you enjoy seeing the face of the man responsible for recording the everyday activities around Knettishall. 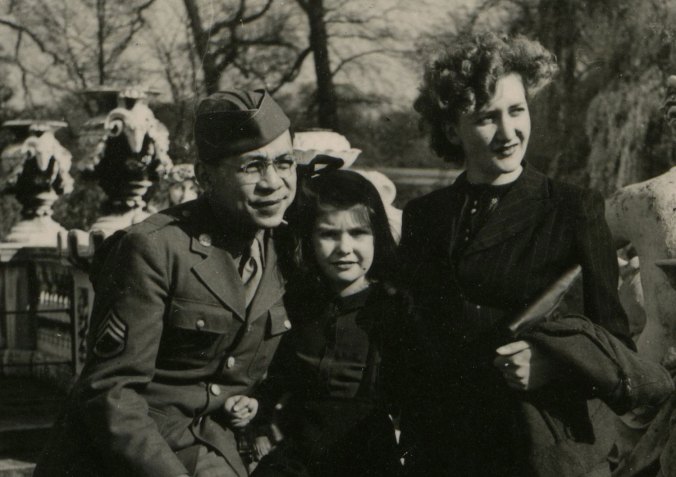 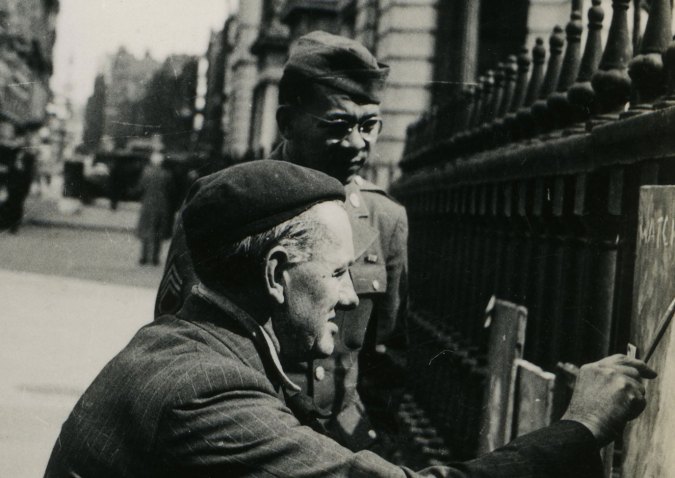 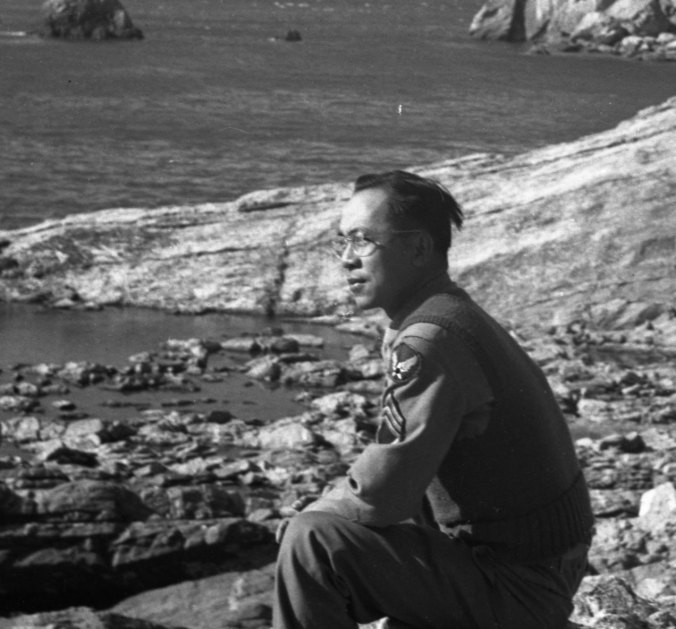 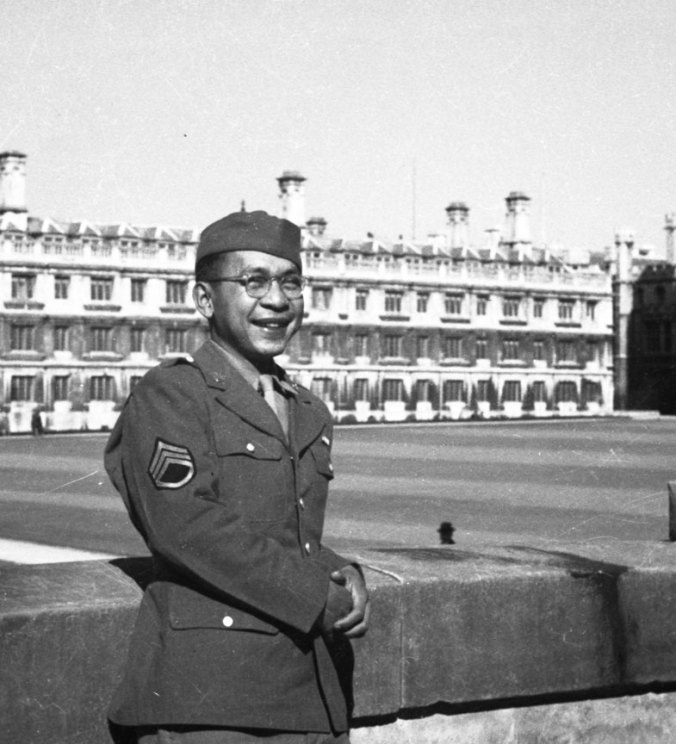 The tension in the air is almost palpable.  Painted bomber jackets, crusher hats, and wafting palls of smoke all set the scene.   A basic map is being chalked on the board, while pilots and navigators take note.

Alva Alegre took every opportunity to shoot in and around London while on pass.  His images capture wartime London as seen in 1944, at a time when the Luftwaffe was still a real threat to the civilian population.  Please enjoy the view through Alva’s lens as he travels throughout the city of London! 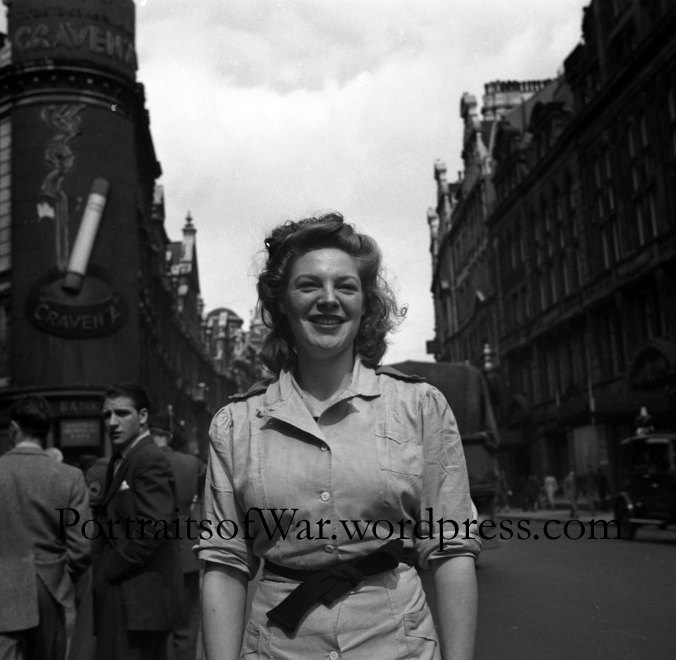 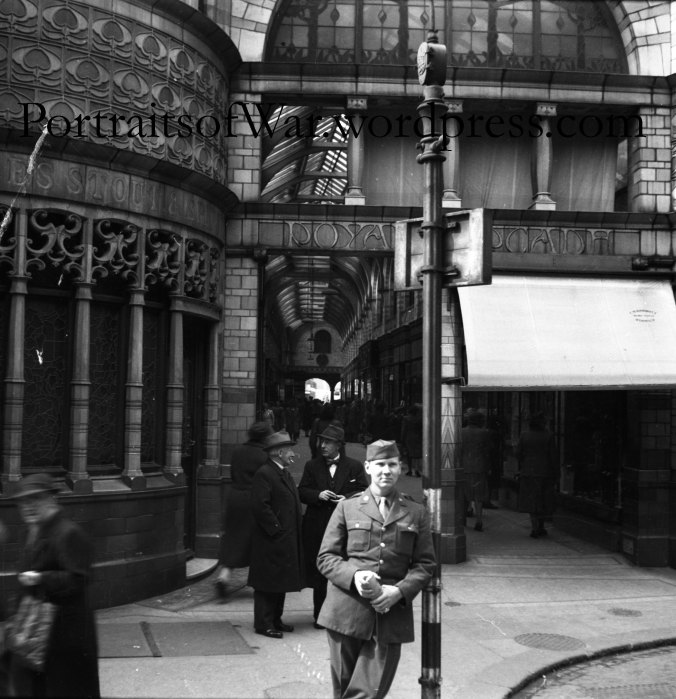 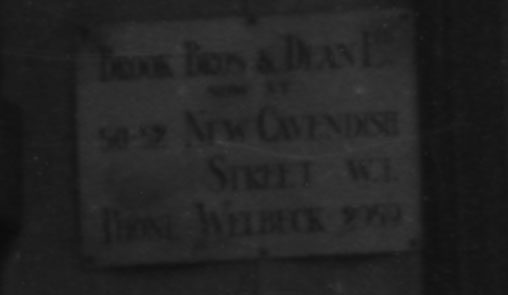 Glenn Miller poses with some members of the 388th Bomb Group.  Only a few months later Miller went missing during a flight over the English Channel,. spurring 70 years of mystery and intrigue.  His death is still an unknown, although many suggest that he was in fact a German spy.     The second image shows the crowd during the concert – snapped by Alegre from the front of the stage. 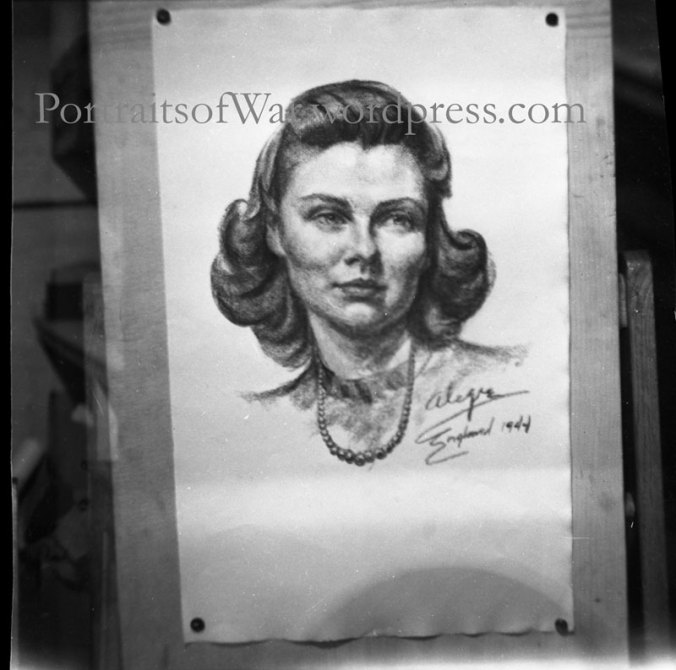 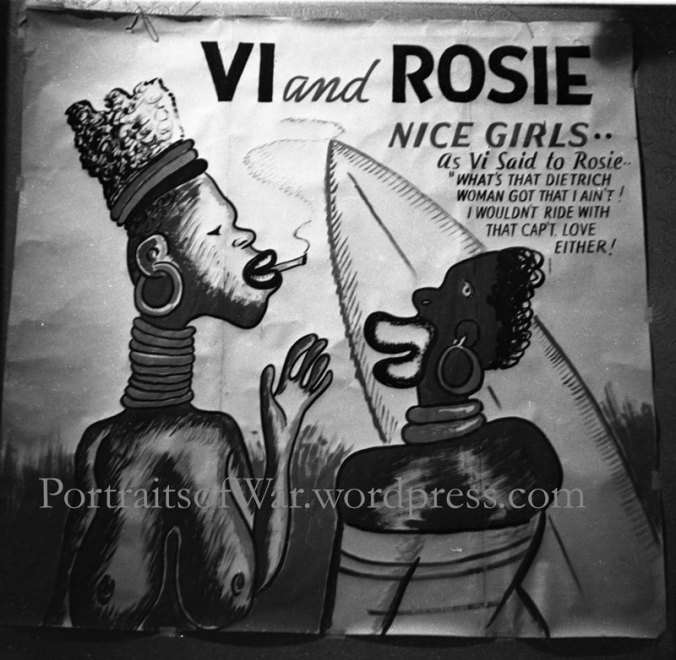 Various shots of buildings in and around the 388th base at Knettishall England.  Nice shot of a WAC building with a cute WAC standing outside.  More to come, check back for more! 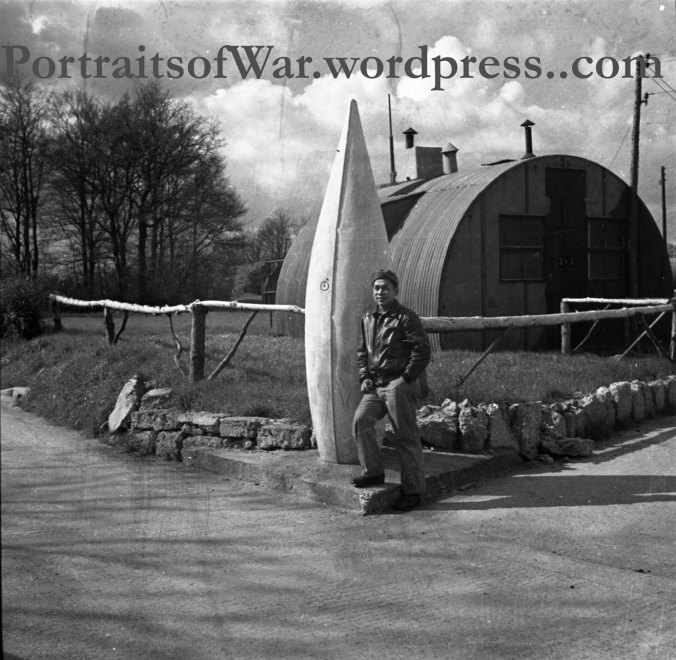 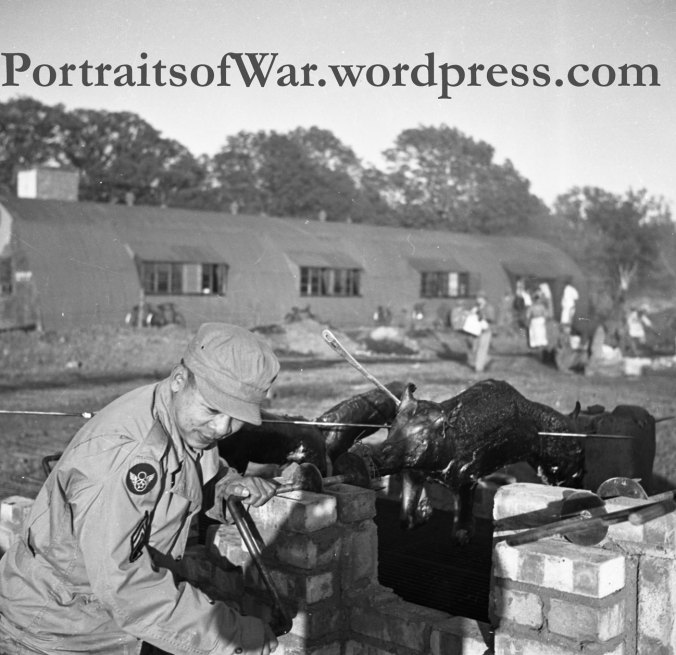 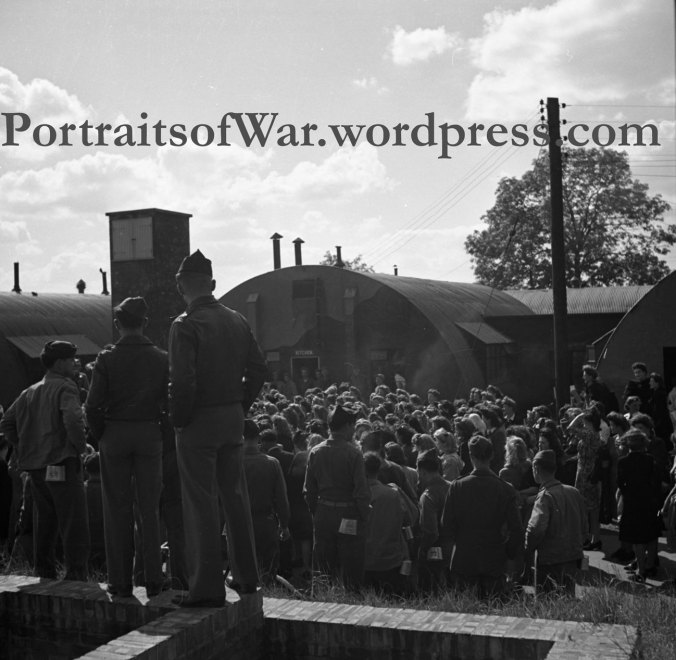